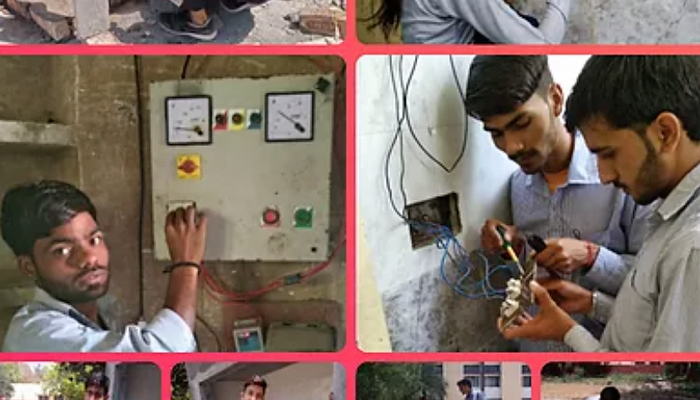 Udhyam Shiksha Program has had the biggest boost this summer with projects running in more schools and colleges than ever before. The enormity of the program is being tactfully handled by our core team members and facilitators.

Shiksha set its first foot in the northern plains this year. Industrial Training Institutes of 4 districts of Haryana, namely- Gurugram, Faridabad, Narnaul and Nuh were chosen for our pilot projects. These ITIs offer 1 and 2 year courses in various fields ranging from electrician to tailoring skills. Most of the students in these courses have a different outlook towards education and skill accumulation owing significantly to their socio-economic background.

The Udhyam team's initial task was to get them out of their box and help them think beyond the boundaries laid out by the society and the environment in which they grew up. Simultaneously they were primed for the Shiksha program's outdoor business project. This was achieved through high energy and interactive games. One such game was a role play as a salaried employee, self-employed individual, mentor and social worker. Students were made to enact and then enumerate the pros and cons of each role and give their opinion as to which role they would prefer the most.

They followed this up with Shiksha‘s classical team building exercises like building a bridge with match sticks and locked in. In the latter game they were given a hypothetical scenario of being locked in a room for 24 hours with limited equipment to survive the night. Students were forced to think on how to ration, coordinate and make the best out of what they had.

A range mini projects were undertaken by the students including a survey of all the problems that they faced on the campus. The students shortlisted the ones where they can intervene and fixed those problems. This included fixing the electrical circuits, watering the plants and cleaning the surroundings. This taught them about the smaller problems that they can take care by themselves instead of blaming or waiting for the authorities. Furthermore, they also got a first hand experience of the limitations of being in the working class and providing for the college’s needs. Since they took ownership of the work, they also learnt how to be responsible in the campus with regard to littering and handling equipment.

They had a session on ideation for their Shiksha ground project. This included an assessment of their skills, resource availability, cost-benefit analysis and demands according to the season. Most of the projects that they came up with included selling food and beverages. A group of girl from Gurugram however, who were studying sewing technology took this opportunity to  promote their skills and started taking orders for stitching clothes from their neighbourhood. They used the time during the program to work on their designs. While most students are really excited about the program, the experience of the facilitators has been quite mixed. The students enjoy the practical and game like sessions and don't see much value in the reflection and conceptual ones. However, through the conducive environment that we have created, most students express their dissatisfaction in case the class seems out of place. The daily student and facilitator feedback has helped us modify and strengthen our concepts and curriculum.

Due to some technical glitches the students couldn't reach out and market to the community but they are having a Mela at their campus in the coming week. Follow our Facebook and Instagram pages for fresh updates.