Volunteer to Co-founder - My journey with Udhyam 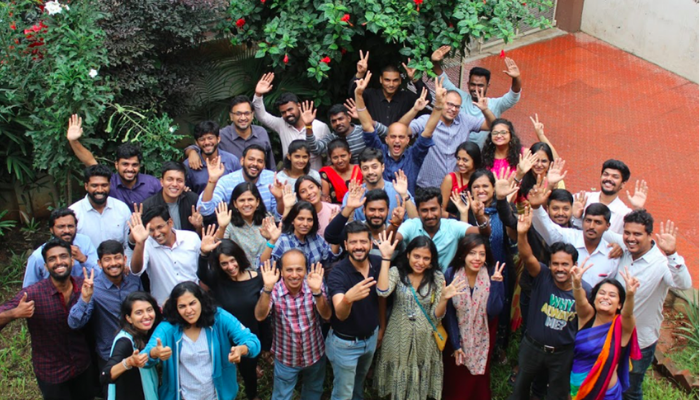 "Hey, I was travelling when you called the first time, so couldn't pick",

I said to a friend while returning his call the next day.

"And I had called you again a few hrs later", was his reply.

"Yeah, I was at a customer location then",

I said, carefully choosing words from my corporate-gifted dictionary, before we quickly got into other conversations

Nope! That day in Feb 2018, I was neither on any business trip by air that I had been so used to, nor visiting an Insurance company's swanky office to meet CXO Level folks. I was in an auto-rickshaw, on my way to meet some of the vyapaaris in Bismillah Nagar (off Bannerghatta road in Bengaluru), each of whom had a monthly sales turnover (NOT profit) of less than ₹20k.

Looking back, it all started mid-2017 with our decision (my wife’s & mine) for me to quit my corporate job so I could  figure something in my area of interest - in the education space. At that time I was deputed in the US for 2+ years, so it also meant packing up with family and returning to India. And boy - what a decision that has turned out to be so far!

As I joined as a volunteer and then shortly after, moved into an early team member Generalist role into the non-profit start up that Udhyam was, my world and I were starting to change in many ways.

For starters, as the 9th employee of Udhyam, I knew everyone and everyone knew me in the organization compared to larger corporates where I was acquainted with a very small fraction of the workforce. Joining an org without a formal offer letter was unheard of for me until then, and when I heard from RK that all the previous employees including himself were just made verbal offers and had joined, I requested him to send me atleast an email that I had been hired, along with role and compensation details :)

Next, as late as in 2017, I remember making grand statements to some friends that I would do anything in my career, except for sales and HR. And here I was just a few months later - selling the concept of Udhyam Vyapaar to Vyapaaris, and setting up Freshteam for our hiring needs [went on to do a lot more with HR in subsequent years - happily!] As someone who was taught and re-taught firmly from childhood that it was important to succeed, and failure is a bad thing, here I was at the age of 38, in the earliest days of Udhyam Vyapaar trying to deal with the fact that my first 40 pitches to Vyapaaris were a failure! And so were the 1st iterations of some experiments we tried later that year.

Fast-forward to 2019 - by when I had moved to Udhyam Shiksha, and I am reminded of talking to at least 200 candidates to hire the next 10 people in Shiksha. From my previous tuning of optimizing largely for speed of decision making, the culture at Udhyam by now was pushing me to start learning the art of being more open, listening better and bringing in more transparency in decision making. And I had found the perfect coach in Mekin to enable this for me.

What takes the cake among these is that for close to 3 years, it was the highly non-ambitious me (at least I believe so) trying to steer Udhyam Shiksha with very ambitious goals :) And recently - at a time when I had just moved out of a significant operational responsibility (of running Udhyam Shiksha), being designated as a Co-Founder has stirred up both gratitude and aspiration.

Gratitude for the renewed faith in my response-ability (that’s a new word I learnt recently) from the people and board of Udhyam. Gratitude towards every single individual who contributed to Udhyam Shiksha since inception, not just for the value added but also for bearing with my numerous mistakes with projects and people; Gratitude to the supreme forces of the universe for the beautiful (yet very hard) journey from “volunteer to co-founder” which almost feels unprecedented or may be something that very very few have experienced in the world. And endless gratitude to Mekin for being the one of the strongest pillars of support throughout this period.

Among aspirations for Udhyam - number one is to enable millions of lesser privileged Indian youth to become economically independent adults; to enable them to actively engage with the real-world in a variety of ways and take informed decisions a lot more than they are today, without the fear of making mistakes.

Another long term aspiration is to enable a large shift in customer spending patterns for goods and services across the country - moving from the Tatas and the Reliances towards the likes of MSMEs and street vendors.

While these are from an organisation mission standpoint, continuing to focus on doing the right thing each time for Udhyam and its people in a given context, stays as top personal priority as an aspiration.

This writing that I intended to keep short already appears to have strayed from that intention. But it does kind of summarize the last four and a half years of shift - from for-profit to non-profit, from Object oriented programming to Learner oriented programs, from DevOps to Development Sector Operations, and from service-oriented architecture to just being Service oriented!